KEEP IT REAL. That's my most used mantra. If you're going to engage in social media, I think the only way you can preserve the 'real you' is to dispense with the sugar coating and show the bad as well as the good. So this week's blog won't be all trophies, PBs and monster weeks. Far from it.
I kind of ground to a halt this week. I bounced out of bed Monday morning at 4.45am, did my 90min ride with the Trifitness crew, cooked breakfast, drove up the Hume to Dookie (250km) and got started on what was a great week of work with a great group of final year vet students.
I nailed every training session (except 2 slightly shortened rides) in the week, and even fitted in a bonus swim on my way back from a full day visiting an incredible 2000 cow dairy.

It was a beautiful sunny day here today. The first in a week. And Pete was keen to run. So I said I would run to the park with him, just to see how I felt, and walk if I was no good. The first kilometre was 6.45. Felt like 5.45. Ok, definitely NQR (Not Quite Right). I ran for 40 min, and some of it felt ok. It certainly made me feel better, but I think it also solidified the fact that this weekend wasn't going to be a good weekend, and maybe I was better off listening to the body (for once) and cutting my losses. 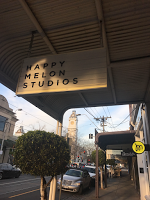 I went to the community (free) meditation at Happy Melon tonight. It was amazing, as always, and one of the teachers discussed our thoughts and how we can deal with them. Ask 3 questions of a thought:
1. Is it true?
2. Is it useful?
3. Is it kind?
I probably could have done with that yesterday, but it certainly meant a lot to me to hear it today.
I actually discussed what had gone on this weekend after the meditation. I love that we have discussions in these classes, and someone asked me to share what it all meant for me. I was embarrassed to be talking to these 'normal' people about my crazy batshit hobby that leads me to train all weekend, and then mentally berate myself if I don't manage to get green all over my training peaks page. And yet, after the class, several people approached me and wished me luck for Hawaii, and genuinely seemed to admire what it was I was doing. I guess our 'normal' is what a lot of people would aspire to do, but haven't yet got the belief that they can.
Pete put it best when he reminded me that I haven't wrecked this prep because of 2 days, and I need to remember how consistent I have been in the past months, years, and even the last 10 years. I cannot begin to say how lucky I am to have that man beside me.
And so, I've pressed "reset". Let's start again tomorrow.

The week's stats (All of Sunday will end up red)